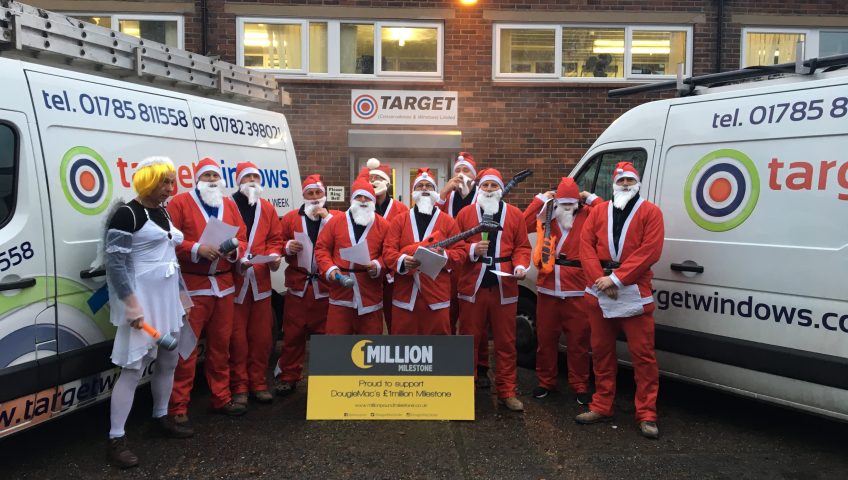 Target Windows is hoping to spread some Christmas cheer by releasing a video which sees staff don Santa suits and belt out a festive hit.

They were joined by Christmas angel, production director Mick Tune, who braved the cold in white tights and a yellow wig.

He said: “It was a very cold morning, but it was all good fun and seeing me dressed as an angel certainly gave the lads a laugh. We hope the video makes people smile too.”

The video went live today and is being shared on social media. It will be displayed at Target’s showrooms in Stone and Uttoxeter.

Guy Basnett, director of Target Windows, said: “The idea came on the back of last year’s Christmas video, which was The Twelve Days of Christmas. Loads of people commented on how much they enjoyed it, so we wanted to do another this year, only do a funny take on a pop hit.

“It was certainly a laugh – the lads won’t be making it into the charts any time soon; they’re much better at fitting windows than they are at singing!”

Target also took the opportunity to announce its support for the Douglas Macmillan Hospice, as a corporate partner. The company will be taking part in the charity’s Jail or Bail challenge, which will see Target raise £2,000 for the hospice.

To celebrate the release of the video, Target Windows is running a Facebook competition to give people the chance to win a luxury Christmas hamper from Il Gusto Trentham. To enter, just like and comment on the post here. Usual Ts & Cs apply.

Target is offering another chance to win a prize this festive season. Anyone who books a January 2018 installation this month will get huge savings on new doors, windows, a conservatory or an orangery.

On top of that, one lucky winner will receive £100 in Love2shop vouchers.  Winners will be announced on February 1, 2018. Usual Ts & Cs apply.

For more information call 01782 398021 or pop into a Target Windows showroom in Stone or Uttoxeter.