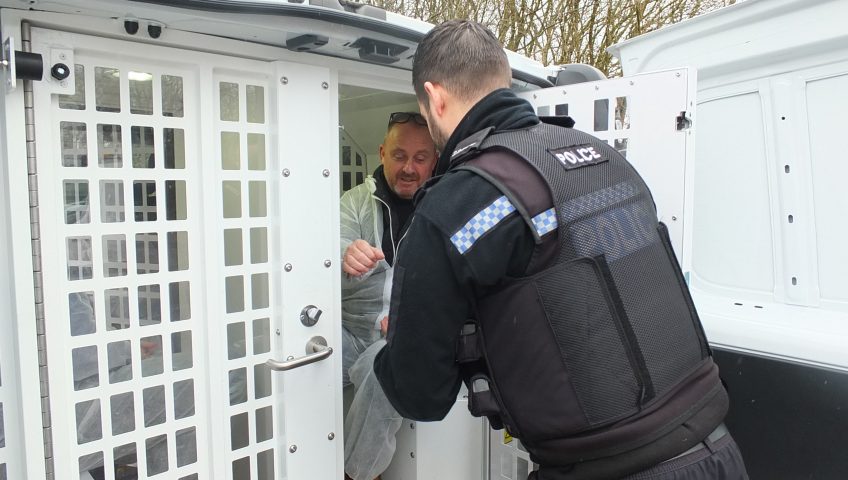 The boss of a family-run window company has spent a day locked in a prison cell to raise over £1,800 for the Douglas Macmillan Hospice.

Guy Basnett, director of Meir Heath-based Target Windows, was picked up by uniformed officers and bundled into the back of a police van on Wednesday after signing up to take part in the hospice’s 2018 Jail or Bail Challenge.

Mr Basnett spent Valentine’s Day in a cell at the disused Magistrates Court in Fenton, along with David Webster, CEO of Douglas Macmillan Hospice, Ian Walker, director of Fifteen Group, and Dave Meakin, a driver at Jones & Shuffs.

He said: “I was made to wear a white jumpsuit over my puffer jacket, so I looked like Michelin Man, then stuffed into the back of a police van in a cage. 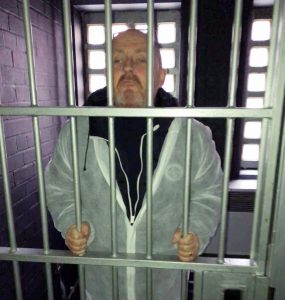 “We all had our finger prints taken and then we were put into a dark, dank prison cell. We were allowed our phones, so we could plead for donations to secure our freedom. It went really well, and some of my mates were offering to donate more to keep me in there! I’d like to thank everyone who donated. I think the Dougie Mac has raised £4700 so far.”

The Jail or Bail campaign marked the 45th anniversary of the hospice providing local care to local people. The money will go towards the cost of funding the services provided by the Dougie Mac at the hospice in Blurton and across the North Staffordshire community.

You can still donate by visiting jailorbail.everydayhero.com/uk/target-windows, calling 01782 398021 or popping into a Target Windows showroom in Stone or Uttoxeter.